Rienzo makes most of All-Star opportunity 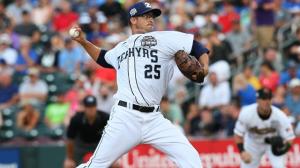 Andre Rienzo worked a scoreless second inning during the PCL’s 4-3 loss to the IL. Photo by: Chris Donahue

When the Pacific Coast League announced the players it had selected to attend the 2015 Triple-A All-Star Game at Werner Park in Omaha, Zephyrs starter Andre Rienzo’s name was not on the list, despite a 2.75 ERA.

But when fellow starter Adam Conley was summoned from New Orleans to Miami for a spot start the Saturday before the break, Rienzo was chosen to replace his teammate for his third career All-Star nod. It was an honor that Rienzo said he was very humbled to accept.

“Conley deserved it and couldn’t go after he got called up, so I went and I really appreciate that the team gave me a chance to go,” Rienzo said.

Having previously pitched in the 2011 California/Carolina League All-Star Game and the 2013 Futures Game, Rienzo was able to draw from his experience and work around a leadoff walk to toss a scoreless second inning in an eventual 4-3 PCL loss to the International League’s best.

“I have been in the bullpen before so I just tried to relax and not do too much, because sometimes when you go to the bullpen you do too much and get a loss. I just wanted to go to the All-Star Game and have fun. The game is about having fun and I tried my best and had fun with the whole thing,” Rienzo said.

The 27-year-old right-hander from Brazil had set down the two batters he faced in the California/Carolina League tilt and then followed that up two summers later with a perfect frame with a national audience at the Futures Game at Citi Field. Pitching for the World Team, Rienzo got San Diego’s Austin Hedges to pop up, got Cincinnati’s speed demon Billy Hamilton to ground out, and struck out Texas’s Delino DeShields Jr.

Rienzo said he didn’t think too much about his impressive performance two years ago, instead opting to just go out there and try his best and have fun.

“The Futures Game was different. Everybody in that game was just happy to be there, and our league’s All-Star Game is in the middle of the season so we can just have fun and see friends from other teams on the other side,” he said.

After walking Dixon Machado to open the second inning last Wednesday, Rienzo got Jackie Bradley Jr. to line out and then induced a groundout from James Beresford before striking out Matt Hague to end his night in front of the national TV audience on MLB Network.

Setting aside the TV cameras, Rienzo focused on his task and has now thrown 2 2/3 scoreless innings in three career All-Star appearances.

“It’s really cool because this is one of the things you work for,” Rienzo said. “You care a lot about your teammates and your team, but sometimes when you have that kind of chance to be by yourself in an All-Star Game, it’s pretty cool.”