Haines sticks up for Capps on Opening Night 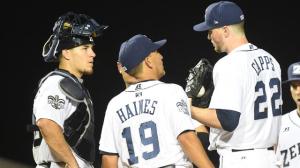 In the 10th inning on Thursday night, New Orleans manager Andy Haines called on Carter Capps. The hard-throwing righty took his warm-up tosses and threw his first offering to Orlando Calixte, but it was deemed Capps was throwing an “illegal pitch.” Haines charged out of the first-base dugout and spoke to the umpires, and returned following a brief meeting on the mound with the 25-year-old.

What followed was bizarre.

Capps offered his second pitch to Calixte, but it was quickly dismissed as another illegal ball, prompting Haines to get ejected by first base umpire Tom Woodring while sticking up for his reliever.

Capps finished throwing to Calixte – two balls in a less-than-comfortable motion – before being replaced by Grant Dayton. Omaha went on to score four times in the inning to take a 10-6 victory.

“It’s unfortunate for the people that paid to watch the game,” Haines said. “It was a great game that was back-and-forth, ends up in the 10th inning, and you never want to sit here and say that decided the game, because there are so many things that happened prior to that. But at the same time, it was a major influence on the game.”

“For a leadoff walk, to just hand him first base. For it to happen on Opening Night of a very important season for a kid like Carter Capps, there’s nothing OK with it.”

Capps, who has 88 games of major league experience under his belt, was charged with the loss in the game, although he only threw four pitches.

“I’ve got a lot of hard feelings on it, I think it’s wrong,” Haines said. “Carter Capps is a big-time pitcher with a big-time arm, so he’ll find a way to make an adjustment, if we have to, but this goes above all of us. This should be MLB and there are a lot of different variables involved, where it’s just not good for anybody.” “If I was on the Omaha side, I wouldn’t have liked it either. I don’t want the game decided that way. I want it decided between the lines with two teams battling it out, after they’ve fought back-and-forth for three-and-a-half hours.”