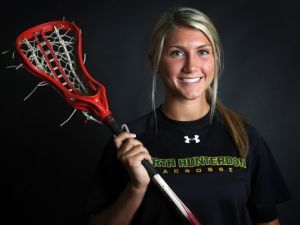 When Julia Wood first started out in the girls lacrosse program at North Hunterdon High School four years ago, there was no way she thought she’d be a record-breaking midfielder that would go on to earn a Division I scholarship. But after 235 goals and 315 points in her four seasons with the Lions, Wood has earned both of those accomplishments with flying colors.

“Especially since my freshman campaign was not the best; I know it’s not all about goals, but I only had four of them,” Wood said. “But I think I’ve come a long way since then. I definitely didn’t expect all of this since freshman year.”

Wood, who netted 101 goals and 33 assists in leading North Hunterdon to a 19-4 record, a third straight Hunterdon/Warren/Sussex Tournament title and a berth in the North Group IV semifinals, is the Courier News Player of the Year.

“I’ve been lucky to coach her for the last four years and she’s one of those kids that she’ll take a hit and she’ll get right back up,” North Hunterdon head coach Stacy Ditze said.

This season, as the victories piled up, Wood eclipsed alumnus Alison Jaeger in two scoring categories in school history. With her 78th goal of the season on May 12, Wood passed Jaeger and her sister Caroline for the most goals in a single-season in school history, and when Wood notched goal No. 216, she went by Alison for most career goals for the Lions.

Wood was held to fewer than three goals only twice this season, and scored seven goals on three different occasions. But her finest moment may have come in the North Group IV quarterfinals, against Bridgewater-Raritan. Wood poured in seven goals and added two assists, lifting the Lions to an overtime victory and a third meeting of the year against rival Ridge.

“Honestly, I’ll of course remember the H/W/S Championships, but this year, our game against Bridgewater in states, when we went into overtime is the one I’ll always remember,” she said. “We came back, then they came back, they tied it up and we won in overtime and that game will always stick out to me.”

After registering just nine points as a freshman — she only appeared in seven games — Wood became a wrecking ball, scoring 70, 60 and this season 101 goals, vaulting her up the all-time record book at North Hunterdon. In what seemed like a simple advancement, Wood said she just got more comfortable with her teammates and on the field, which led to the higher scoring outputs and even more Lions’ victories.

“She came out confident as a freshman, in my eye,” Ditze said. “But for me, the thing she improved on most was her game-sense; she understood when to shoot or pass or hold the ball and she was able to lead us with that sense. She really came up clutch for us a lot and she’s an all-around player that did what it took for us to win.”

Next season Wood will be suiting up for the University of Louisville — a program that set a school-record for wins and advanced to the NCAA Tournament for the first time — along with fellow Courier News first-teamer Jillian Balog. The bond they’ve shared since seventh grade, playing on T3 Lacrosse teams, is something Wood is really looking forward to continuing as collegians, even if she’ll be back at the bottom of the totem pole as a freshman, just as she was four seasons ago.

“I think going into next year, into a D-I program, I just need to remember that I am a freshman and even if I don’t play at all, I have to keep my confidence up and I think my turn will come with hard work,” Wood said. “Playing with Jillian is going to be great; I love playing with her. We went to camps together, so I’m really excited to play with her in college.”