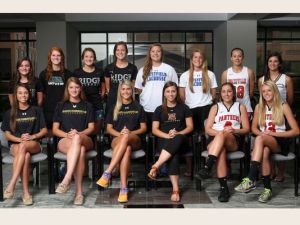 Balog, the leading scorer in the history of New Providence girls lacrosse, scored 54 goals this year and finished with 183 for her career. She’ll play at Louisville next season.

Behrins, one of two players for Ridge to total 95 points this season, netted 56 goals and a team-high 39 assists and registered 11 hat tricks this year.

Brown posted 58 goals and added 37 assists, for a team-best 95 points. She netted 21 of her goals in postseason contests, including nine in the Somerset County Tournament.

Cavallo netted 75 goals to go with 28 assists and finished her career with 208 goals and 260 points. She’ll play collegiately at Towson University next year.

Lane, the Hunterdon/Warren/Sussex Tournament MVP won 128 draws with her height advantage and totaled 90 goals and 119 points for the Lions and will play at Marquette.

Mastroianni burst onto the scene with 97 goals and 158 points, good for second-most in the state. The freshman phenom also controlled 133 draws for the youthful Panthers.

Pastore, who was the state’s second-leading scorer, has already set Somerville records. With 128 goals and 30 assists this year, she is up to 299 goals and 411 points for her career.

Wood, the Courier News Player of the Year, broke multiple school records with a 101-goal, 32-assist campaign that pushed her points total to a North Hunterdon-best 312 in four seasons.

D’Amico helped lead Westfield to the brink of the Union County title, racking up 57 draw controls and matching up with opponent’s top-scorers.

Dewitt a clutch lockdown defender for the Red Devils, anchored Ridge to the SCT title and a berth in the Group IV Final. She finished with 38 groundballs and 33 caused turnovers.

Howarth won 48 draws and scored 12 goals to go with her usual steady defense, locking horns with No. 1 scorers and helping lead a very young Panthers squad.

Martino averaged nearly eight saves per game and backstopped the Lions to the HWST title and the semifinals of the North IV tournament.

Weisse, a true anchor for the Blue Devils, made 578 saves as Westfield has turned its program around from 5-13 two years ago into a sleeping giant in Union County.