Leave a comment
By andrewconstant10 Golf, The Courier News 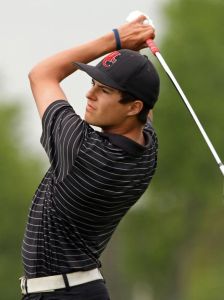 HILLSBOROUGH – Despite missing a two-foot birdie putt on his opening hole of the day, Dylan Stein posted the round of his life Wednesday morning.

The junior from Hunterdon Central turned in a tournament-record 66, winning the individual title and helping the Red Devils capture the team title at the Skyland Conference Golf Tournament at Royce Brook Golf Club.

Stein birdied five holes in a row from the 7th to the 11th and then birdied the final two holes to card his lowest round ever, besting Alex Edfort’s previous tournament-record of 67, which he shot in 2009 when the tournament was held at Neshanic Valley.

“I didn’t start off that great; but when I made five in a row, I realized I could go low today,” Stein said. “I feel like I really improved down the stretch and I played really well today. I felt that unless someone else went really low, it would stand up and I would lock this one up.”

Hunterdon Central, which played on Tuesday in the NJSIAA Sectionals but didn’t qualify for the Tournament of Champions, came back strong, according to coach Larry Ries.

“Yesterday, we didn’t play that well, but I’m proud that they came back the next day. I didn’t know how they’d react to playing 18 holes in another tournament, back-to-back. So I’m really proud,” Ries said. “For Dylan to shoot 66 is fantastic. I wouldn’t say it’s a surprise to me, but I thought he could shoot even-par (72). Posting 66 is a hell of a number and Dylan really works on his game and he’s very serious and when you put the time in, you become a good player.”

The 19 schools all played on Royce Brook’s private West Course Wednesday, which pushed 30 golfers’ scores over 90, making Stein’s 66 all the more impressive.

Another star from the day was Watchung Hills’ Mike Graboyes, who shot an even-par 72 to finish third in the individual competition.

“I definitely left a few out there, I burned the edge all day and I left a few short,” Graboyes said. “I hit the ball amazingly, but I couldn’t get it done on the greens, so it’s a little frustrating. But I had a good time out there.”

Graboyes and his Watchung Hills teammates did qualify for next Monday’s Tournament of Champions, which will be held at Hopewell Valley Golf Club, and he said that having some momentum going in will help.

“We don’t have as strong of a team as we did last year, but I was really happy that we made it back to the Tournament of Champions and I hope we repeat as Group IV champions and we’ll see how we do against the rest of the state,” Graboyes said.

Justin Chae of Pingry, who also qualified for the Tournament of Champions, finished second in the individual competition with a two-under 70. He and his Pingry teammates will join Watchung Hills on Monday in Hopewell.