Leave a comment
By andrewconstant10 Girls Lacrosse, The Courier News 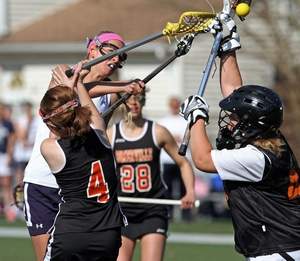 Immaculata’s Kelsey Graham fires off one of her four goals as Somerville’s Amy Miller and goalie Sarah Clark try to block on Thursday in Somerville. Photo by: Kathy Johnson

SOMERVILLE — Despite building up an eight-goal advantage late in the first half, the Immaculata High School girls lacrosse team had to hold on for dear life Thursday afternoon against its neighborhood rival.

Behind the balanced scoring of seniors Kelsey Graham and Sojourner Mineo and sophomore Jenna Naples, Immaculata held off Somerville 15-13, to remain unbeaten in the young season.

The Pioneers closed the gap to one on two occasions in the second half, but never were able to tie it or take the lead, as Mineo posted three of her four goals in the final 9:33 to boost the Spartans (5-0). The first of those goals came just seconds after Mineo’s two-minute penalty had expired, and she sprinted into an open area of the field and beat goalie Sarah Clark to put Immaculata up 12-10.

“That was definitely a turning point for us; we just realized that we needed to get back in the game and keep pushing the issue and the game wasn’t over yet,” Graham said. “It was a little scary, for them to come all the way back against us like that, and we definitely didn’t expect it, but we’re willing to adjust and work with what happens.”

Mineo put Immaculata up 14-10 with 7:46 to play, taking the draw control straight down the field and beating Clark just inside the crossbar, but Somerville (2-3) refused to go away quietly. Star junior Dakota Pastore scored two of her game-high 10 goals in the final minutes, nearly bringing the Pioneers back all by herself. Pastore also reached her 200th career goal, becoming the first player in her program to reach the milestone.

Half of Pastore’s goals (one of which was her 200th career goal) came from the free position arc, as Somerville shot 5-6 as a team on free position shots. But having dug themselves such a big hole — Immaculata led 9-3 at the half — was just too much to overcome for the Pioneers.

“Early on the girls were a little rattled, being down so quickly, so it took them a little bit to get their focus together,” Somerville head coach Maylin Harter said. “But I had a lot of confidence that once we could get the draw, we could score without problems and Dakota is such a phenomenal player. We’re extremely lucky to have her.”

Graham spearheaded the Immaculata run in the first half, scoring three times in the first 11 minutes of play, including two free position shots. Her fourth goal, also from the free position arc, with 8:02 remaining, was part of a 3-0 Spartans run that was ultimately the difference. Graham credited her teammates for never losing faith in themselves, despite Somerville’s comeback attempt.

“This year, the team dynamic is completely different and we really know how to work like a team and get the ball around and it just works great for us,” Graham said. “Everyone is a part of it and I love it. It’s an indescribable feeling to be a part of this team this year.”

Naples recorded a hat trick in the first half for Immaculata and added a fourth goal midway through the second half, while goalie Kendall McKeon came up with five saves, none bigger than a doorstep robbery of Pastore with 1:20 left and the Pioneers down by two.

Earning a victory over their local rival — the two schools are just half a mile apart — is something the Spartans can take for the next part of their season, according to Graham.

“We’re going to use this win to set us off for the rest of the season,” she said. “It was awesome to get this one.”