Leave a comment
By andrewconstant10 Boys Lacrosse, The Courier News 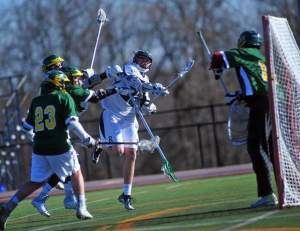 Ridge, No. 1 in the Courier News Preseason Top 5, took home its first Tournament of Champions title a year ago, with Palladino leading the way. In his junior season, Palladino scored 55 goals to go with 35 assists.

Palladino, a four-year starter for the Red Devils, scored five times in Ridge’s season opener Wednesday against North Hunterdon, getting him off to a good start as he looks to replicate his impressive stat line from a year ago. But Palladino said that this season, he wants to be more of a distributor to get his teammates more involved.

“I’d like to expand my game and become more of a feeder,” he said. “I’ve definitely tried to work out and be more athletic and faster and get a better IQ of the game. The more I play, the more I’m into the game, so that’s what I’m trying to do this year.”

With a commitment to Harvard for next season, Palladino not only has secured a place for his lacrosse career to continue, but he’ll be entering one of the most prestigious universities in the world for further his education. Ridge head coach Ken Marsh noted that Palladino has grown immensely from when he entered the program four years ago until now.

“He was a quiet freshman when he made the team, and he started in his first year. But during his sophomore season, he became more confident and he wasn’t the most coachable player,” Marsh said. “He matured last season and now it’s on a whole different level. He’s a leader and a team player and it’s been really nice to see him mature. He comes from a great family and he’s truly a great kid that has turned himself into one of the most dominant players in the state.”

While Ridge was rolling through the postseason, Palladino became a house-hold name, going up against some of the best teams in the state. He said that going through that helped his image, but winning was the most important thing of it all.

“Obviously we played some great teams and if you do well against great teams, people notice and the fact that we won was a huge bonus,” he said. “I did well, but I have to get better every day and that’s what I’m trying to do.”

The fact that he continues to remain humble impresses Marsh, someone that said he’s one of the best players he’s seen come through his program.

“He had high expectations for himself last year and I know he has similar expectations this year,” Marsh said. “He knows that he can create offense on a regular basis and he’s going to take every chance he can get. He’s really a great physical specimen.”

If Ridge is going to repeat as state champions in 2014, Palladino is going to be the one that takes them there. But he’s up for the challenge of being the one that opponents look to for just about every second of a game – he didn’t come off the field in Wednesday’s win over North Hunterdon.

“I’m just trying to take it one game at a time and get as far as we can in the state tournament,” Palladino said. “That’s my main goal, to win another championship.”