Leave a comment
By andrewconstant10 Boys Basketball, The Courier News 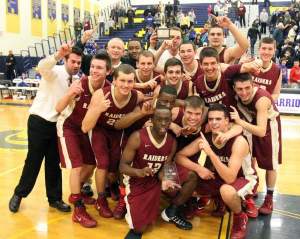 FRANKLIN (SOMERSET) — With less than 40 seconds remaining in overtime and the game tied, James Smith came up with the shot of his life.

The senior point guard knocked down a jump shot just inside of the arc to give the Hillsborough High School boys basketball team its 11th and final lead of the game, and the Raiders’ defense held in the final seconds to win its first Somerset County Tournament title, 53-52, over Gill St. Bernard’s in overtime Saturday afternoon.

Smith finished with a team-high 14 points, with half of them coming in the fourth quarter and overtime, and was named as the Tournament MVP.

Smith said that he knew before taking the game-winning shot he could make it.

“That’s a shot I’ve been working on in practice and I’ve gotten confident that whenever I take it, I’ll knock it down,” he said. “I try and find open spots on the court and when I’m open, I take them.”

Smith had given third-seeded Hillsborough the lead at 51-49 with 2:10 to play with a runner in the lane, but Harrison DeMaira’s fifth 3-pointer of the game gave top-seeded Gill St. Bernard’s the lead back with 1:15 to go.

Jalen Parham missed a pair of free throws with 52.7 remaining, but the Raiders got the ball back on a scramble under the hoop following the second miss, setting up Smith for the heroic shot.

“I don’t even know what to say right now,” Hillsborough head coach Ian Progin said. “We did everything we could on defense, but we got stops when we needed to and James Smith was incredible. He hit a big-time shot for us.”

After Smith’s go-ahead basket, the Raiders defense needed to come up with one more defensive stand in the closing seconds. Tyus Battle, who poured in a game-high 22 points for the game, dribbled into the lane and missed a layup with 4.1 seconds left, but the ball went out to the Knights. In a last-gasp chance to tie the game or win it, Gill St. Bernard’s couldn’t get a shot off following the inbounds pass, setting off a wild celebration by the Raiders players and student body.

“We knew where it was going; it was going to Battle. He’s a great player, but we just all dug in and got a stop,” Smith said. “We strapped up, as we like to say, and we kept our hands up on them. I’m really proud of the way we played on defense.”

DeMaira scored 17 points for the Knights, who had a four-point lead with three minutes remaining in regulation, but saw it shrink completely after a pair of free throws from both Jack Panagos and Matt Westphal.

Battle gave Gill St. Bernard’s a lead at 47-45 with 90 seconds left in regulation, but Smith knocked down a clutch jumper to tie the game. DeMaira had a wide-open look for the win in the final seconds of regulation, but the ball rattled off the rim and out, forcing overtime.

Battle scored just five points in the second half and overtime, after pouring in 12 in the opening quarter. He consistently saw double-teams from the Hillsborough defense, but didn’t waver in his approach, according to Knights’ coach Mergin Sina.

“He’s a tough kid and he fought through a lot of things in the game,” Sina said. “He never moaned and groaned about it, which I don’t know if I would have.”

Panagos chipped in nine points and four rebounds for the game for Hillsborough and Matt Hornich added seven points and eight rebounds.

“We played an excellent game,” Hornich said. “The role players and the starters, everybody. It’s just awesome to bring the championship to the town of Hillsborough.”

The Raiders will forever have a banner inside their gym to look up at and admire, after beating the sixth-seed Rutgers Prep and second-seed Montgomery en route to the final.

“We’ve never won one of these, so these guys will be able to walk into that gym for the rest of their lives and see that banner and say they accomplished that,” Progin said.