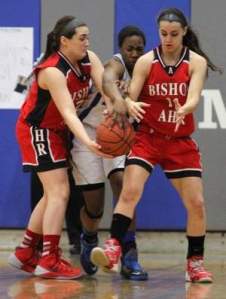 Sayreville’s Isi Enanoro (center) tries to strip the ball from Bishop Ahr’s Ellie Cimillucca (left) as she gets the pass from teammate Lauren Barlow. Photo by: Mark R. Sullivan

SAYREVILLE — For the Bishop Ahr High School girls basketball team, the 2013-14 season has been full of ups and downs. But on Tuesday night, the Trojans played one of their better games of the season, getting a career-high 24 points from Lauren Barlow and a monster double-double of 18 points and 15 rebounds from Brianna Foster to edge Sayreville 64-58.

Bishop Ahr (11-8, 8-5 GMC Blue) had 15 assists on 25 made baskets and shot an even 50 percent from the field to post its most impressive victory of the season, to date.

“We’ve had our growing pains; with a freshman point guard and a sophomore in the backcourt as well, you’re going to have some growing pains,” Bishop Ahr head coach Kevin Harper said. “But we feel that we’re moving in the right direction and I’m as happy as you can be at this time of the year.”

Jenna Harsh gave the Trojans a big boost, returning after missing multiple games with an injury to post 16 points, making all six of her free throw attempts, including a pair with 24 seconds remaining to put the game out of reach.

“Having Jenna back gives us and inside and outside presence. Foster did a huge job in her absence and it just gives us balance to have her back,” Harper said. “We have something from the outside and from the inside. It feels like we’re fighting with two hands instead of one.”

Early on it looked like Bishop Ahr was going to run Sayreville (12-5, 9-4 GMC Blue) out of its own gym on Senior Night. The Trojans only trailed 2-0 in the opening minute, eventually taking the lead at 4-2 and never surrendering it. But just before halftime, Sayreville senior guard Jackie Rodriguez got loose for a pair of long-range 3-pointers to cut the halftime lead to 28-24.

Bishop Ahr simply refused to let the lead slip away entirely, as Harsh scored eight of her 16 in the third quarter and Lauren Barlow seized control of the game in the open court. Of her career-high 24 points, 11 came after intermission, including two fast-break layups. Freshman point guard Elle Cimillucca finished with eight assists and Sam Driscoll added four more helpers for the Trojans.

“Coach told us before the game that Sayreville was going to fight and we were going to have to be unselfish,” Foster said. “We had to move the ball and we just broke down their defense and got some really easy looks.”

In the waning moments, with Sayreville mounting a run, Foster scooped up a loose ball for a layup and Harsh knocked down a pair of free throws to thwart the momentum.

As a team, Bishop Ahr knocked down 11-18 from the line, something that Harper said might not have happened early in the season.

“In the beginning of the season, I didn’t feel confident we’d make them, but now I do. We gave games away at the free throw line, but the young kids are coming along and we feel good where they are,” he said.

Rodriguez finished with just 11 points for Sayreville, giving her just 18 points in the two meetings with Bishop Ahr this season. Freshman Ryane Brush was the only other offensive star for the Bombers, scoring 16 points and adding seven rebounds.

“This is really a good win; we’ve had some tough losses in the division this year, but I sensed it on the bus coming here that we really wanted this one,” Foster said.