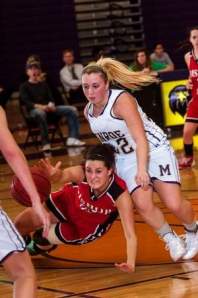 MONROE — As the saying goes, “when the going gets tough, the tough get going.”

For Erica Junquet and the Monroe High School girls basketball team, the going got tough at the end of the first half, but a 20-11 advantage coming out of the locker room got the Falcons going en route to a 57-52 victory over Bishop Ahr Tuesday night in a key GMC White Division battle.

Junquet scored 16 of her game-high 22 points in the second half and made three clutch free throws in the final minute to preserve the win.

“Erica has gotten better every year and she’s really developing into the point guard position. She’s not just a distributor, she’s able to recognize who’s open and she can knock down shots for herself,” Monroe head coach Leigh Vogtman said. “She’s turned into a very good player.”

With Bishop Ahr (5-4) refusing to go away in the fourth quarter, Junquet made five free throws, including two with three seconds remaining to push the lead from 55-52 to 57-52.

Jenna Harsh, who hadn’t scored for three quarters, came alive in the fourth for Bishop Ahr, scoring 13 points, the final two of which coming with four seconds left to cut the lead to three.

“This is our third tight game this season and it says a lot about the character of our team, to not give up at the end and pull it out,” Vogtman said.

Bishop Ahr went into the locker room with a one-point lead thanks to a 10-0 run to close the second quarter. Senior Brianna Foster scored the final six points of that run and finished with 15 points and seven rebounds, but didn’t score in the fourth quarter. Lauren Barlow led Bishop Ahr with 19 points, including a 3-pointer with 43.1 seconds left which cut the deficit to 54-50.

Monroe (7-1) was able to execute from the free throw line when it mattered most, shooting 11-for-16 from the charity stripe, with nine of those coming in the final eight minutes.

In the third quarter, the Falcons shot 8 of 14 from the field, with Junquet leading the way, to turn that one-point halftime deficit into an eight-point lead heading to the fourth. Junquet scored nine points in the third quarter and Cindy Foresta, who had been shut out in the first half, scored six points.

“This was big, not only for divisional purposes, but confidence-wise for this team,” Vogtman said. “What we talked before the game was that they had to believe they could win close games.”

Barlow and Foster each dumped in six points in the second quarter, which Bishop Ahr won 15-7. But coming out of the half, the Trojans turned the ball over four times, something that Vogtman said helped her squad get its footing back.

“We talked about playing good, strong defense, with some pressure, but playing smart and not picking up some silly fouls. Our defense turned on our offense in the third quarter,” she said.

“Going into that game, there was a lot built up; we had lost to them twice last year and we really wanted to win that one,” Vogtman said. “But not getting it really may help us because it’s not hanging over our heads anymore.”