Red Devils able to seize momentum in 2nd half 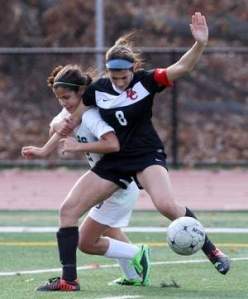 Hunterdon Central’s Yota Sfondouris (8) and East Brunswick’s Sydney Rosa get tangled up during the first half on Monday. Photo by: Jason Towlen

EAST BRUNSWICK — Within the first three minutes of the second half of their Central Group IV semifinal match against East Brunswick Monday, the Hunterdon Central High School girls soccer team turned a tie score into a two-goal advantage, seizing all of the momentum in the process.

Christine Tack and Gabi Provenzano found the back of the net two minutes apart in a stunning turn of events just after the intermission to lift the third-seeded Red Devils past second-seeded East Brunswick 3-1 and into the sectional final on Thursday.

East Brunswick’s Sydney Rosa tied the score at 1 in the 25th minute, working down the right wing and scoring from near the end line on a shot that went in off the far post, but Hunterdon Central wasn’t fazed. Tack’s goal came just 29 seconds into the second half, and served as a big lift to her squad.

“We talked about trying to get the ball wide and to the end line, because we felt that was a place we were the most dangerous in the first half,” Hunterdon Central head coach Jeannine Calhoun said. “Tack made a far-post run and she actually had run past the ball, but she was able to get back and turn her hips, with her back to goal, was a pretty nice play.”

Moments later, Hunterdon Central got a bit of luck when East Brunswick’s goalkeeper Alex Kalafor left the net to challenge a long run down the left wing, but the ball squirted through to the middle of the box where Provenzano was waiting. The freshman didn’t waste any time, blasting the loose ball into the net to put the game out of reach.

For Hunterdon Central, winning in regulation was something it hadn’t done in its previous three games, dating back to the Hunterdon/Warren/Sussex Tournament Final. Calhoun said she thinks that only having to play the required 80 minutes Monday will help on Thursday, when it will see Montgomery for the third time this season.

“That was the first thing we said to the girls after the game ‘Thank you for not going to overtime,’” she said. “It’s been three draining games, so it was nice to do it in regulation and that’ll put us in a better place in terms of fatigue and freshness for Thursday.”

Kaitlin Greenstein gave Hunterdon Central the lead in the 21st minute when she banged home a shot from outside the box that Kalafor couldn’t handle. But four minutes later, Rosa bailed Kalafor out.

For the Bears, the Greater Middlesex Conference Tournament champions, and head coach Kevin Brady, there was no sense in hanging their heads after the game.

“At this juncture of the season, every goal takes you closer to the end of the season. But as I told them after the game, there’s no team I would rather be coaching in an elimination game down 3-1. This team showed why in the second half,” he said. “I always believed in the guts and the heart of my team. We were gutsy from minute one to minute 80 and their hearts of champions showed in the closing minutes.”