Leave a comment
By andrewconstant10 Gymnastics, The Home News Tribune 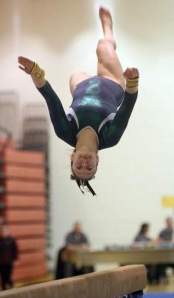 East Brunswick’s Kylie Feldman competes on the balance beam at the NJSIAA Central sectionals on Saturday. Photo by: Kathy Johnson

“Today was a really nervous day for me, because I hadn’t been hitting on my routines,” Rybinski said. “I didn’t do my best today, but it feels great to advance. I didn’t even think something like this was possible for me. I just need to clean it up for next week.”

Rybinski helped South Brunswick finish fifth in the team competition with a score of 105.350, 4.100 behind champion Bridgewater-Raritan.

Joining Rybinski in next Saturday’s Individual Finals was South Plainfield’s Nicole Sottiriou, who finished sixth in the All-Around (36.175) after winning the beam (9.550).

Sottiriou was having herself a potential top-3 day before a fall on the bars, but was pleased with the effort

“I was hitting everything solid and then I just slipped up on Bars,” Sottiriou said. “I was waiting around a little bit before I got started and I just overthought it. I don’t know what happened; I was doing well in warmups and I just slipped. It happens, it’s not the end of the world.”

Even with the fall, Sottiriou’s marks were high enough on the other three events to negate the 7.575 on the bars. She would finish fourth on the vault (9.450) and second on the floor (9.600) to round out her day.

“I’m lucky that I still qualified and I know that last year I worked my butt off and missed out by less than a point,” Sottiriou said. “It was devastating to miss out on it last year, so I didn’t even care if I just made it, by a slim margin or not.”