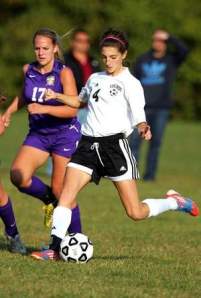 MONMOUTH JCT. — Three times proved to be a charm for the South Brunswick High School girls soccer team Tuesday afternoon. The third-seeded Vikings, who lost a pair of overtime games during the regular season, refused to make it a trio of defeats in extra time and got a sudden-death goal from Cagnie Antczak for a 3-2 victory over sixth-seeded Monroe in the Greater Middlesex Conference Tournament quarterfinals.

With a throw-in from the right side of the field four minutes into overtime, South Brunswick’s Brielle Errico tossed it in and, after a pair of touches, the ball landed on Antczak’s left foot. The senior lofted a shot that eluded the outstretched arms of Monroe goalkeeper Erin Seppi, setting off a celebration as the Vikings advanced to Thursday’s GMCT semifinals.

“It’s one of the greatest feelings to know that you scored a goal for your team,” Antczak said. “To win the game for my team is an amazing feeling. It’s indescribable.”

Overtime was needed after a crazy sequence in the 64th minute, which saw both sides score goals within 30 seconds of each other. With the score tied at 1-1, South Brunswick won a corner kick and the ball went all the way through the box and came out to Taylor Brantely, who buried it on the short side.

But Monroe was not fazed; they took the ball straight down the field and worked it to sophomore Brooke Bussiere, who chipped it past South Brunswick goalkeeper Sydney Schneider to even the score.

“We talked a lot about how teams play differently in the postseason, because it’s a life-or-death kind of situation,” South Brunswick head coach Beth Barrio said. “And I think that the girls were prepared to have a tough game today. We knew coming in that Monroe was going to be a very difficult opponent; we played them twice in the regular season and when it went into overtime, I don’t think they were surprised.”

Before Antczak’s heroics in overtime, Errico had three separate rushes up the field, all resulting in shots wide of the net. But Barrio said she had stressed to her squad before the extra period began that they didn’t want it to get to penalty kicks.

“We’d been in this situation before and we know what it’s like to be on the wrong end of an OT game and we didn’t want it to get to penalty kicks; that would be a terrible way for this to end,” she said. “So we just tried to pump them up and say that the third time is the charm and that it was their game.”

In the early going, it looked like Monroe would be the team celebrating, especially after its two stars combined for the game’s first goal. Demi Rousseau dribbled all the way down the right wing and crossed a perfect ball to the foot of Taylor Evanchik, who tapped it home in the seventh minute.

But South Brunswick refused to go away, and in the 34th minute, the Vikings won a penalty kick after one of their players was hauled down in the box. Sam Stojanovski calmly stepped up and knocked it in, knotting the score at 1-1.