Bulldogs sweep their way to title 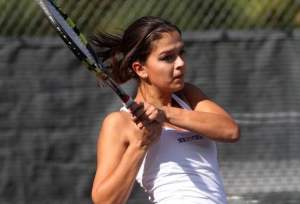 METUCHEN — On a day when the Metuchen High School girls tennis team repeated as Central Group I champions, third-singles player Lisa Allgauer was entrenched in the match of the day against New Egypt’s Dianna Byrne. With all of the other four matches already complete and the Bulldogs already having wrapped up the title, Allgauer trailed in the second set, but rallied to win the final three games, capping an afternoon sweep for Metuchen.

“I think she got off to a good start and when the match got a little bit closer, she played a little bit more tentatively and I think towards the end, she was down 3-4 and those last three games were her best of the match,” coach Rob Strauss said. “She really started to believe in her stroke and regain her confidence and I think she finished the match off really strong. We need that from her from the start on Thursday.”

The Bulldogs (16-1) advance to Thursday’s state finals at Mercer County Park in West Windsor on a serious roll. The top seed in the Central Group I bracket hasn’t dropped a set since the quarterfinals against Point Pleasant Beach, after sweeping Highland Park and New Egypt. First singles player Catherine Popow did her part to get Metuchen off on a good foot, disposing of Anna Farrand 6-0, 6-0. From there, her teammates did the rest to ensure a clean victory.

“When we’re warming up, I usually try to analyze what her weaknesses are and coach will help me out between games,” Popow said. “Like he’ll point some stuff out to me and I was able to pick up on one of her weaker areas and I just kept repeating the same shot that was working. I’m just so glad we got to do this again and we’re hoping to keep it going on Thursday.”

“Coming into the season, we had high expectations, knowing we had our three singles returning and Tiffany has been playing great at doubles. But we had three new girls come in and fill the voids and it’s pretty amazing what we can do when we play up to our potential,” Strauss said.

Tiffany Yao and Siri Uppuluri dominated their first-doubles match against Cassidy Wiltshire and Brielle Perrins, 6-0, 6-1, and Laura James and Christina Michalski sealed the deal against Devin North and Sarah Daly 6-1, 6-3. Strauss said he hopes his squad plays like it did on Monday every day, winning all five matches in straight sets, but knows that momentum is key in doing so.

“Obviously we want to try and whoop them, but I do think that coming off the semi-final win against Highland Park and being so dominant in that match helped us,” he said. “It gave us a lot of confidence today and the girls just executed really well today.”