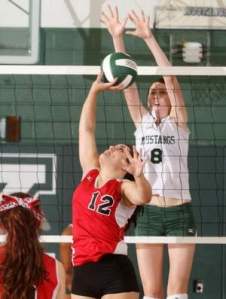 ISELIN — With a five-game winning streak on the line and the potential of beating a local rival for the second time in the same season for the first time in school history, the J.F. Kennedy High School girls volleyball team came out and took care of business Monday. The Mustangs, behind stellar play from the front line of sisters Cassandra and Francesa Garison and Alexa Parmann, dominated Woodbridge 2-0 (25-9, 25-16) in front of a raucous crowd to stay hot at the most important time of the season.

“Our girls came out focused in the first set; they were serving really strong and putting the ball exactly where we wanted it to go and that was the game plan,” head coach Robert Hugelmeyer said. “We wanted to take advantage of the crowd early on, knowing we’d have a big crowd today and the girls feed off of that.”

After running away with the first set, J.F. Kennedy was met with a lot more resistance from their neighbors from less than two miles away, but Cassandra Garison put any comeback attempts to rest with her powerful swings. She came up with two aces and multiple blocks to keep momentum on her squad’s side, getting help from the rangy Parmann and her sister Francesa.

“I think after a first set like that, the other team is going to come back more ready to play, so that was the difference,” Hugelmeyer said. “They’re a good team so you expect them to play better. But this feels great; we’ve actually never taken both matches from Woodbridge, we usually end up splitting with them every year, so this feels good for the team.”

With precious few matches remaining before the Greater Middlesex Conference Tournament, Hugelmeyer knows that his squad still has some work to do if it is going to meet its ultimate goals.

“There’s always room for improvement and there’s always things we want to do better. We went to the semifinals of the GMCT last year and our goal is to get back and win it this year and we feel like we have the ability to do it. I know there are a lot of tough teams in the Red Division, but when the girls play well, they can do it,” Hugelmeyer said.

As is the case in any sport, learning from prior mistakes is key for improvement, and J.F. Kennedy is no exception. Since losing to Old Bridge on Sept. 26, the Mustangs have dropped just two sets, overpowering their opponents and continuing to rack up GMC victories.

“The girls are learning from some of the tougher matches we had in the beginning of the season, especially the two we lost against Colonia and Old Bridge,” Hugelmeyer said. “The girls saw the mistakes they made and they’ve made the proper adjustments and corrections and with volleyball, as the season progresses, the team begins to gel a little bit more.”

J.F. Kennedy will get two cracks at Red Division contenders later this week when its travels to Monroe and East Brunswick. If the Mustangs can escape this week unblemished, it’ll go a long way to strengthen their chances in the postseason.