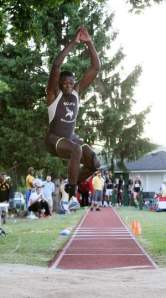 SOUTH PLAINFIELD — Coming into the spring track season, South Brunswick High School track and field star Jonathan Pitt was widely regarded as the top triple jumper in the state of New Jersey. He had set the indoor record in the winter season and seemed poised to win an outdoor title in the event at the NJSIAA Meet of Champions.

But Dominique Irons of Haddon Heights had other ideas, spoiling the party for Pitt and the rest of the field, jumping a meet-best 48-0 to take home the gold medal Wednesday evening at Frank Jost Field.

Pitt finished in a tie for second place with Cedar Grove’s David Njoku with a jump of 47-6.25, and the silver medal is not what Pitt expected when he arrived at South Plainfield earlier in the day.

“I’m definitely very disappointed because I feel like I was the favorite coming out of the winter season,” Pitt said. “Getting second in nationals, people thought I would come here and win this thing and it wouldn’t even be close, but it’s not the last anyone will see of me, so I’m going to keep working and do some big things from here.”

Irons qualified first for the finals, with a top-jump of 48-10, besting Pitt’s 47-0.75, and in the finals, the Haddon Heights’ senior unleashed the winning jump in his second attempt.

It wasn’t the first time that Irons had gotten the best of Pitt this month. Just last weekend at the Group IV meet in Egg Harbor, Irons topped 50 feet (50-6.75) to beat the LSU-bound Pitt by more than two feet.

“Congratulations to him, he works really hard for this,” Pitt said. “The jumps weren’t as long as people expected, but it was still a great competition and I’m just happy to have made it this far. Second isn’t anything to be ashamed of.”

Tyrell Judson of Piscataway, one of Pitt’s training partners, set out to place this season after faltering in the same event in 2012. While he wasn’t one of the top three, Judson came home with a fourth-place finish after a final round jump of 46-7.

“I came out and all I wanted to do was place, because last year I didn’t place,” Judson said. “So I made it a goal that I was going to place today.”

The friendship between Judson and Pitt is something that both of them will miss when they move on to college in the fall.

“I’ll always remember working out with Jon,” Judson said. “He’s one of the best kids I know and he pushes me to be better and I’m going to miss all of that with Jon.”

Judson placed seventh in the long jump earlier in the day and sophomore Myles Hartsfield of Sayreville finished fifth in the same event.