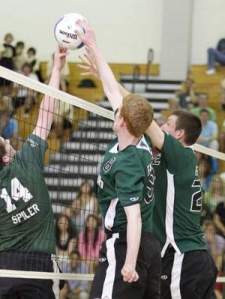 St. Joseph’s Sean Finan and Greg Vatjay go up for a block during Tuesday’s Tournament of Champions semifinal against Livingston. Photo by: Augusto F. Menezes.

MONMOUTH JCT. — When the St. Joseph High School boys volleyball team is focused on the task at hand, they’re very difficult to handle.

Despite the tough play of Livingston in the first set of Tuesday’s NJSIAA Tournament of Champions semifinal, the top-seeded Falcons rallied and moved closer to their first state title since 2008 with a 2-0 (26-24, 25-16) victory.

They will play Southern Regional, a 2-0 winner over Fair Lawn, in Thursday’s final.

The Falcons got a push from the North 2 champions in the opening set, but it wouldn’t have been so close if not for unforced errors in the serving department.

In last Friday’s Central sectional final, the jump-serves of Michael Hilyard and Ray Kowalski won St. Joseph the match over East Brunswick. But against Livingston (26-5), each of the seniors hit the net with their first serve, handing the ball back to the Lancers.

“In the first set we tried to go out there and go too hard too fast, we couldn’t get a serve into the court and we were trying to serve real aggressive and that too some momentum from us so we were getting frustrated and it impacted our hitters,” St. Joseph coach Miguel Cabrita said.

The two teams were tied nine times in the opening set, but St. Joseph (41-4) picked up the momentum they needed when Sean Finan delivered a powerful kill to put the Falcons up 20-18.

Bryan Rafano thwarted a Livingston surge with a point of his own and then Finan finished it off with a thunderous kill at the net.

“Sean has always been our go-to guy and we rely on him to be cool, calm and collected,” Cabrita said. “He always holds his composure and as long as his passing is on the offense comes to him, so we relied on him a lot today.”

Finan finished with 11 kills in the contest and also added four digs.

“I was just trying to be fired up and keep everybody else fired up,” he said. “When our energy is up, it usually shows in the way that we play, so I just try and go around and tell all the guys to stay focused on every single point individually.”

From the opening serve of the second set, St. Joseph was indeed focused, leading from the start behind Finan and setter Sean Dacey, the latter of whom now has a state-best 1,170 assists this season. Finan picked up a pair of aces in the second set and Dacey chipped in one of his own to lead the Falcons’ surge.

“In the second set, we scrapped the aggressive serving and we stuck to what we know is consistent; serve the ball tough, but nothing crazy, so we at least have a chance on defense,” Cabrita said.

Dacey led the Falcons with 25 assists in the contest and libero Kurt MacDonald recorded 17 digs to up his state-best total to 560.

“Kurt’s always been that catalyst that gets the whole team motivated and he’ll come up with some of those big plays that you’ll see,” Cabrita said.

Finan knows that his squad will need to play a much better brand of volleyball if they’re going to win the school’s fourth state title Thursday afternoon. But, the senior noted that it would be such a big accomplishment if this particular Falcons team were able to get the job done.

“It’s very important for us, if we come out like we did today, it will be tough to win. So we need to come out even harder,” Finan said. “We’ve had good teams in the past and we’ve been so close and it would mean everything to get over that hump and win a state championship.”