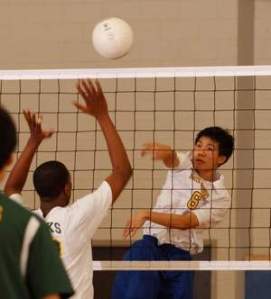 Over the last few years, the North Brunswick High School boys volleyball team has been building itself into a contender in the Greater Middlesex Conference.

Through eight matches this season, the Raiders have the looks of a squad ready to take that next step.

North Brunswick sits atop the GMC White Division with an 8-0 record through Wednesday, dropping just one set in those matches and outscoring opponents 434-282 in the process.

Leading the way are two seniors — Jon Lin and Rohan Chittella — both of whom have played a lot of volleyball in the last 12 months.

Lin, the Raiders’ primary setter, and Chittella, one of the the team’s outside hitters, have been putting up big numbers since the season kicked off three weeks ago. Lin has racked up 178 assists, good for an average of just over 22 per contest, and Chittella’s 95 kills are tops on the squad.

“Jon and Rohan played full club seasons this year and they played on a team with a lot of the East Brunswick players,” North Brunswick coach Jim Biolsi said. “They gained a lot of exposure from that club season and they have improved greatly from last season. Rohan has great ability to terminate the ball to get kills for us out there.”

Chittella and Lin are two of just three seniors on the Raiders’ roster, the other being Ryan Lehnau. Biolsi says that only graduating two seniors from last year’s squad has helped the current roster exponentially.

“We gained a lot of experience last year and our guys are a lot more capable of dealing with pressure situations and making adjustments in a match,” he said.

One of the big reasons for North Brunswick’s hot start is the ability to serve well and take opponents out of their game plans. Biolsi said his team doesn’t have one go-to server, but instead utilizes the entire roster to float-serve and knuckle the ball over the net.

“Our serving has been very effective and it’s been a team effort,” he said. “We’re not very big and we don’t score a lot through blocks, but we get a lot of aces and we’re forcing a lot of teams to play more defense against us. We try and cause a lot of chaos on the other side of the net when we’re playing. If we serve well, they don’t have their setter hitting it from the ideal position and we’re able to get a lot of blocks up and that’s a big reason as to why we have such a big point disparity.”

Even though the Raiders have put together a solid three weeks, Biolsi knows that tougher days await, starting with Saturday’s matchup against East Brunswick, one of the state’s premier programs and a GMC rival.

“We need to get a measuring stick as to where we stand,” Biolsi said. “We had a tough scrimmage season, and we did pretty well in those contests, but here in the regular season we’re going through the conference schedule and we want see how we do against good teams.”

In order to achieve some of their goals for this season, which include winning the GMC Tournament and hosting the school’s first state tournament game, Biolsi stressed that the Raiders need to continue doing what they’re doing.

“We play a lot of ball control and play fast,” he said. “We need to be quicker and faster and have a good amount of ball control to compete with the bigger schools. That’s the formula that’s been successful for us.”