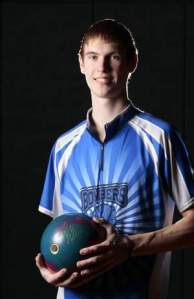 Six years ago, Jay Ciszewski was just like many of his peers: a 12-year-old kid playing baseball in his free time, until one day, a friend asked if Jay wanted to tag along to the bowling alley.

From that day forward, Ciszewski has been in love with bowling and his love for the sport culminated in a magical senior season.

The 6-foot 8-inch Ciszewski from Sayreville High School’s bowling team, capped off a memorable campaign with a perfect 300 game to help lead the Bombers past Jackson for the Tournament of Champions title.

“The 300 that I shot at the state finals was the thing that will stick with me most from this season,” Ciszewski said. “I had never shot one at Carolier (Lanes) and I couldn’t have asked for a better time for a first one there. It was truly a culmination of all the work I have put in over the years.”

Along with the Tournament of Champions title, Ciszewski helped lead Sayreville to the Greater Middlesex Conference Tournament title and the NJSIAA Group III crown.

Ciszewski is the Home News Tribune’s Boys Bowler of the Year.

“Every accolade is important to me, but this one is a little more important,” Ciszewski said. “It’s based on the entire season and the my entire body of work. Anybody can have a good series or a good week, but it’s hard to have a whole season like I did.”

Ciszewski finished fourth at sectionals and then seventh at the state individual competition, but his 223 scoring average was the highest in the GMC this season. Sayreville’s head coach, Michael Weinert, was beyond impressed with Ciszewski’s season and how he handled the pressure of being the anchor bowler.

“We’ve had some really good individual seasons at Sayreville and I’ve seen some really good ones around the state, but his is one of the best I have ever seen,” Weinert said. “A lot of it is mental for Jay, but he’s a leader for us. To have a guy like that on your team is invaluable and an incredible honor.”

Throughout the season, Sayreville faced tough competition from GMC foes such as Colonia and Woodbridge, which forced Ciszewski to step up his performance.

“Our conference is stacked overall and not many conferences can stack with us,” Ciszewski said. “It’s so tough with so many good teams, but that certainly helps us prepare for later in the season.”

Ciszewski had thrown five perfect 300s before his postseason run, but that number would have been one higher if not for a foul on his final ball in the GMCT final. Sayreville was way ahead of Colonia to win the team title, but Ciszewski was working on a perfect game into the 10th frame. He had gotten the first 11 strikes and knocked all 10 pins down with his 12th ball of the game, but Ciszewski’s plant foot went over the line and counted as a foul.

“The 300 near-miss, everyone knows about it,” Ciszewski said. “I’ve been catching a pretty good amount of heat for it since, but there’s nothing to be ashamed of for shooting a 290 in the conference finals.”

Ciszewski credits being at the bowling alley four to five times a week for his recent success, with his job at the pro shop at Carolier Lanes in North Brunswick and all the time he spends actually practicing his craft.

But in the end, Ciszewski stands alone as the GMC’s top bowler, whether he has six perfect games to his name or seven.