Leave a comment
By andrewconstant10 All-Area, Bowling, The Courier News 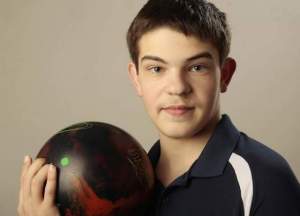 Like many great athletes, Immaculata High School junior bowler Chris DiPaola puts in a great deal of work on his craft to improve from season to season. But DiPaola made a meteoric rise between his sophomore and junior years, bringing up his average from 206 to a Skyland Conference-best 219 this winter.

DiPaola is the Courier News Boys Bowler of the Year.

When asked what the biggest difference was for him this season, DiPaola wasn’t quite sure how to reply.

“It’s hard to say why I was so much better this year,” DiPaola said. “I work hard all the time and I’m always at the bowling alley. I don’t have an answer as to why I was able to pick up my average 13 pins. Maybe I wasn’t thinking as much at the lanes this season, but I just did what I’ve done every other season and the scores kept getting higher.”

Along with the 219 scoring average, DiPaola posted five 700 series and 11 600’s. According to head coach Frank Mazzariello, DiPaola rolled a score of 200 or higher in 37 of his 51 games this winter.

“I have picked up spares so much better over the last year. Coach Mazzariello always says to us ‘make your spares, make your spares.’ I got tired of hearing it and so I decided I was going to make more of them,” DiPaola said with a laugh. “I knew how to throw strike balls, but I needed to pick up the spares better to be great.”

One of the more impressive moments from DiPaola’s season was the 300 game he bowled in mid-January. The perfect game was one of just two bowled in all of the Skyland Conference this season, with teammate Zack Vitelli firing the other on Dec. 19. DiPaola credits his friendship and friendly competition with Vitelli for pushing him to get his own perfect game.

“The 300 was awesome,” DiPaola said. “Zack shot one three weeks before me and he and I like to challenge each other. I just bowled one strike after another and I looked up in the 10th frame and saw I still had it going so I did all I could to seal the deal.”

The Immaculata boys squad didn’t have enough able bodies to compete in statewide tournaments, which hindered DiPaola and his teammates from bowling as many games as some of their friends in other conferences. But, even though they were put in a difficult position, DiPaola helped keep his team upbeat and positive, according to Mazzariello.

“The kids didn’t know about not being able to compete in states until halfway through the season,” Mazzariello said. “With only four bowlers on our squad, Chris kept everyone engaged in the game. He was a calm person and a steady influence to our guys.”

Throughout the season, DiPaola steadily improved his game, climaxing at the Skyland Conference Tournament in late January. DiPaola rolled the highest game of any Skyland bowler with a 266, something he said will help him stay motivated for next season.

“I work very hard to do what I do,” DiPaola said. “To be recognized like this means the hard work paid off, but it also means I need to work even harder down the road to keep getting better.”