Leave a comment
By andrewconstant10 Bowling, The Home News Tribune 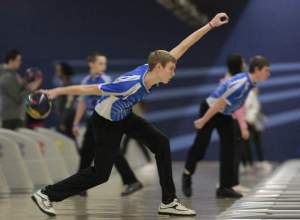 NORTH BRUNSWICK — All season long, Sayreville High School boys bowling head coach Michael Weinert made it known that if his team bowled to its potential, opponents would have a hard time beating them.

On Wednesday, the top-seeded Bombers completed a perfect run through the Greater Middlesex Conference, knocking off second-seeded Colonia 2-0 to win the conference’s tournament title.

Senior Jay Ciszewski came within a fault on his 12th ball of a perfect 300 in the second game, but that extra 10 pins wouldn’t have made much of a difference. Sayreville, which won the first game 1,077-966, exploded for a total pinfall 1,187 in the second game behind Ciszewski’s 290 to win total wood by a staggering 320 pins.

“We were prepared to bowl today. We knew it was going to be a good match and we knew we’d be tested and pushed,” Weinert said. “Credit to Colonia for making it this far; there wasn’t a lot of room for error today. But when we bowl to our potential, we’re tough to beat.”

“The guys had my back the entire tournament; I didn’t bowl that well against St. Joseph on Monday and they picked me up then so I figured I could pay them back today,” Ciszewski said.

He did so in a major way, collecting a strike on each of his first 11 balls in the game, but when he approached the line for the 12th time, his plant foot slid a bit too far and went over the line for a fault. Even though he came that close to a perfect game, Ciszewski found a silver lining.

Chad Gallop kept Colonia in it, rolling games of 231 and 195, but in the end, Sayreville had too much firepower.

On the girls side, fellow top-seed South Brunswick continued to roll its competition, besting third-seeded Carteret 2-1 to capture the team title.

“Carteret bowled an awesome first game,” South Brunswick head coach Tara Burniston said. “Even if we bowled our average, we wouldn’t have won, so I told the girls to forget about it and if they wanted to win, they had turn it up a notch.”

In the second game, Amy Caruso took her coach’s advice and started the game with strikes in the first eight frames en route to a 277. Caruso, the GMC’s Individual Champion, finished with a tournament-best 692 series.

“I knew I had to come out strong because Carteret is a really good team and I just tried my best to take it frame-by-frame and I didn’t think about the bigger picture at hand,” Caruso said.

Even with Caruso’s 277, South Brunswick needed a couple more of their bowlers to step up in the second game to swing the momentum, and Connie Thanapuasuwan and Alanna Zetchus answered the bell. The pair rolled matching 181 games to help spur the Vikings and give them a lead in total pinfall that they wouldn’t relinquish.

Carteret’s Heather Androvich did all she could to will the Ramblers to victory, but in the end, South Brunswick’s depth was too much. Androvich finished with a 665 series (217-204-244) and capped off her day with four consecutive strikes in the third game.