Leave a comment
By andrewconstant10 Bowling, The Courier News 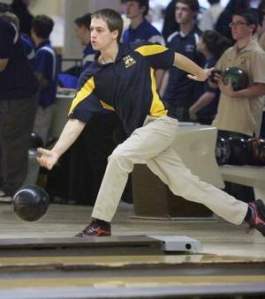 WASHINGTON TWP. — Heading into the third and final game of the Skyland Conference Bowling Tournament Thursday afternoon, Franklin High School coach Ken Margolin took his boys team aside and gave them a bit of a pep talk.

“I just told them that they ‘needed to step it up,’ ” Margolin said, and that ‘there were a lot of teams within 100 pins of us and if we bowl better than everyone else in this game, then we’re going to win.’ We needed to send a message; you’re conference champs in the regular season, so if you want to be tournament champs, you’ve got to step it up.”

And step up they did, as the Warriors rolled a 1,015 in the third game to pull away, capturing the title at Oakwood Lanes.

The sextet of Dylan Coker, Sergey Eccles, Kevin Greene, Jake Hills, Nick Piomelli and Jake Olszyk finished with a team score of 2,960, 99 pins ahead of second-place South Hunterdon. Greene and Hills spilt time for Franklin in the tournament.

“We knew it was going to be tight on both sides,” Margolin said. “We just needed to knock down more pins than everybody else. In this conference, if our boys and girls bowl to their ability, we’re not going to lose many matches.” 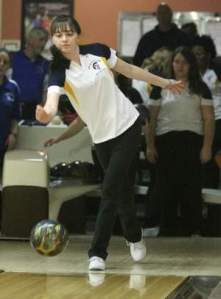 Before the third game, Margolin tried to pump the girls up in a similar way he did with the boys, relaying a simple message of confidence.

“They just needed to relax and trust their stuff and bowl to their abilities,” Margolin said. “That’s been the message all season long.”

“She’s a tremendous coach and someone that has been the voice in their ear when I’m with the boys team,” he said. “She’s been telling them exactly what they need to do and it’s been great to have her on board.”

Both teams led wire-to-wire, but their coach knows that the way they bowled on Thursday won’t take them too far come state tournament time.

“The whole season is about states,” Margolin said. “It’s nice winning the conference and the conference tournament, but it is all about states. We have some work to do when we get to states, but we know what we need to do to move on the rest of the season.”