Yaney was leader for the Panthers 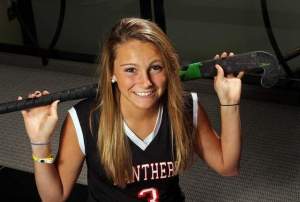 Rachel Yaney stood over the ball, waiting for the official’s signal to attempt her penalty stroke in overtime of the NJSIAA North 2 Group IV final against Montgomery.

She thought back to all of the times that she had practiced taking penalty strokes, and with a flick of her wrist, the forward from Bridgewater-Raritan High School sent the ball into the the net, setting off a wild celebration with her teammates over the 2-1 victory by the Panthers.

“It was something that I had prepared for, but I wasn’t expecting to have that moment in a game, especially one as big as the sectional final,” Yaney said. “If I hadn’t made it, our season could possibly have been over. I just took a deep breath and knew that I had to make that shot.”

That goal, one of the 37 that Yaney caged this season, was just one of the highlights that led her to a superb season.

Yaney is the Courier News Field Hockey Player of the Year.

Yaney added 31 assists to finish the season with an area-best 68 points. Only one player in the state recorded more assists than Yaney this season, and just nine players scored more goals.

“I worked hard for this and I made my own path to get to this point,” Yaney said. “Some other people get things and accolades handed to them, but I definitely deserved to be recognized for the season that I had and all I had done to get to this point in my career.”

Bridgewater-Raritan won the Somerset County Tournament crown all four years that Yaney was a member of the team, and the Panthers also made it to the Group IV state final in each of those years. Yaney knew that this year would be no different than any of the past three, in regards to winning and the effort it would take to repeat as champions.

But as the 2012 season began, Yaney knew that she needed to change the way that she played to help the Panthers meet their goals. She said that through her first few years on the team, she didn’t assert herself as much as she probably could have.

“The fact that I was a senior this year made me step up and be a role model to the younger girls,” Yaney said. “When I was younger, I would just look up to them (the upperclassmen) and I would stand to the side. I didn’t think I had to do anything more to succeed. But this year I stepped it up and played my heart out each game.”

Yaney scored at least one goal in all but three games this season as the Panthers finished 23-2, and her 37 goals nearly matched her total from her first three years combined. Yaney totaled 38 goals and 18 assists before this season.

Next fall, Yaney will be starting over again when she heads to Rutgers University .